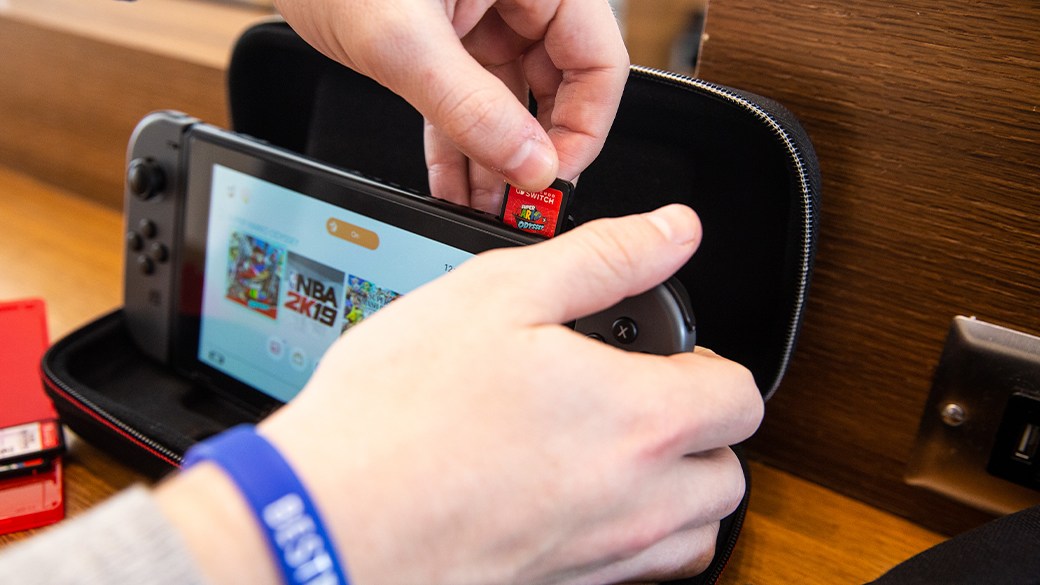 What you need to get started with Nintendo Switch

One of the great things about gaming with the Nintendo Switch is that the hybrid console can be played just about anywhere. It can be plugged into your TV, placed on a table, or held in your lap. The Switch comes with a charging station and all the cables you need to set it up on your TV. All you need is an HDMI port.

While the Nintendo Switch comes with built-in storage, many Switch gamers like to expand their storage with a microSD card of at least 256GB. Storing games locally helps them load faster and avoid lags.

If you plan on taking your Switch out, it’s a good idea to equip it with a carrying case and a screen protector. Applying a good screen protector to your Switch right out of the box will protect the screen from scratches and prevent smudges for better screen clarity.

You can also take advantage of a Nintendo Switch Online membership. This grants you access to select NES and SNES games (some of which are exclusive to subscribers) and unlocks the ability to play online multiplayer. Nintendo Switch Online also lets you save game save data to the cloud. Individual subscriptions can be purchased for one month, three months or one year and annual family plans are also available.

The Switch makes it easy to control what your child can play, download and see on the console. After setting up a Nintendo Account for them, you can set up parental controls to restrict the games and videos they can see, limit playtime, and protect your account from accidental or unwanted purchases. Plus, you can control all of these settings from the Switch Parental Controls app on your phone.

Which Nintendo Switch Should You Buy?

The original Nintendo Switch continues to sell millions of units each year thanks to its versatile gameplay and long battery life. It comes with two detachable motion-sensing JoyCon controllers, a JoyCon grip for a traditional controller setup, and all the cables you need for setup. Special packages such as an Animal Crossing-themed Switch and units that ship with popular games are also available. Sold by Amazon

This version of the Switch features a larger vibrant 7-inch OLED display than the standard Switch. It also comes with 64GB of internal storage, twice as much as the standard Switch offers, and improved sound. The OLED Switch is great if you plan to game in handheld or tabletop mode instead of using your TV. Sold by Amazon

With plenty of color choices and a more affordable price, the Nintendo Switch Lite is a Game Boy for the modern age. It can only play in handheld mode, but it plays all the games available on the standard Switch, both physical and digital. Sold by Amazon

Nintendo’s official carrying case is also one of the most secure, thanks to ballistic nylon and interior hook-and-loop closures. It can carry up to eight physical game cards and fits Switch, Switch Lite and Switch OLED models. Sold by Amazon

Customize the look of your Switch or make room for more friends to play with an extra pair of JoyCon controllers. The JoyCon controllers each have a full set of buttons as well as an accelerometer and gyro sensor for motion control in games like Just Dance and Mario Kart. Each can be used independently or slide both into the JoyCon grip to be used as a single controller. Sold by Amazon

JoyCon controllers are great for casual gaming or games with a lot of movement, but if you’re sitting around for a long session, you might want a more comfortable controller. The Pro Controller features an ergonomic design, motion controls, and rumble. Sold by Amazon

The Nintendo Switch is powerful enough to run massive games like Skyrim, Apex Legends, and NBA games. It’s also the best way to access classic retro titles, including Super Mario Kart, Donkey Kong Country, and several Zelda games. Whether you’re looking for the latest from your favorite AAA franchise or under-the-radar 8-bit indie, the Switch can play it.

Animal Crossing introduced millions of new fans to a beloved franchise, welcoming players to their own comfortable, customizable island. Sold by Amazon

Zelda: Breath of the Wild features a huge open-world map, beautiful graphics, dozens of puzzle dungeons, and one of the best Zelda stories ever told. Sold by Amazon

Stardew Valley is another cozy Switch game that lets you farm, fish, cook, and fight your way through village life. Sold by Amazon

Mario Strikers: Battle League, one of the latest Switch games, combines the mayhem of Super Smash Bros. with soccer. Sold by Amazon

Two Point Campus is another new addition to the Switch library, featuring a wacky take on building management sims, this one set on a college campus. Sold by Amazon

Do you want to buy the best products at the best prices? Check out the daily deals from BestReviews.

Sign up here to receive the weekly BestReviews newsletter for helpful tips on new products and great deals.

Laura Duerr writes for BestReviews. BestReviews has helped millions of consumers simplify their buying decisions, saving them time and money.