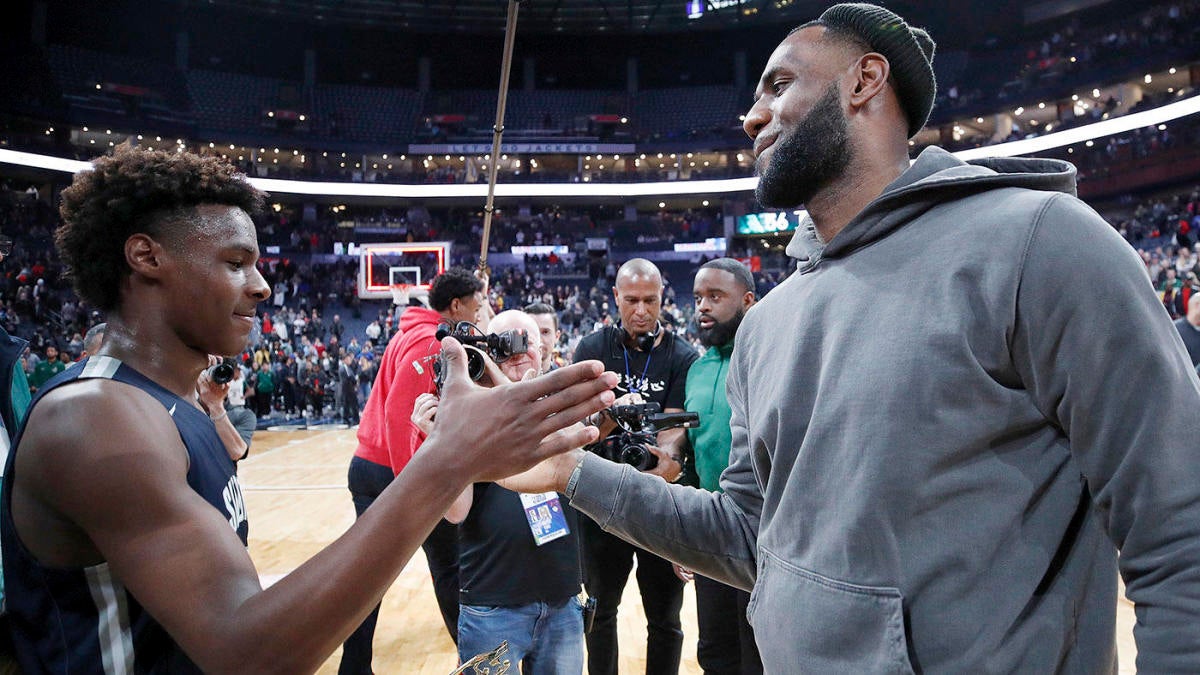 LeBron James Sr. was the highest-ranked NBA prospect in his class from practically the time he could pick up a basketball. He was a prodigy identified as a future superstar years before he was eligible to turn professional and about as close to a sure thing as young athletes ever get. LeBron James Jr., on the other hand, is something a little more conventional.

Midway through his junior season at Los Angeles powerhouse Sierra Canyon, 247Sports ranks James the 34th best player in his high school class. His position as a prospect has slipped since hitting the high school level, as 247 ranked him No. 19 in the Class of 2023 as recently as September 2020. Now? He’s not even the highest-ranked son of a former Cleveland Cavalier in this class, as the 2023 crop is headlined by DJ Wagner, son of former LeBron teammate DaJuan Wagner. A four-star rating is nothing to sneeze at for most prospects. That’s pretty low for a prospect literally named “LeBron James.”

If a prospect of this caliber wasn’t called ‘LeBron James’, you’d probably expect him to spend several years in college developing his skills and preparing to go from college star to professional role player. . This may not be a luxury for Bronny, as his more famous father is already linking the end of his own career to the beginning of his son’s.

“My senior year will be played with my son,” James Sr. told The Athletic on Saturday. “Wherever Bronny is, that’s where I’ll be. I’ll do whatever it takes to play with my son for a year. It’s not about the money then.”

The elder James has not set a definitive timetable for the end of his career. His current contract with the Lakers expires in 2023. Barring a surprise change to the NBA’s one-and-done rule, his son won’t become eligible to be drafted until 2024 at the earliest. At that time, he will be approaching his 40th birthday. He probably won’t want to stay longer than that. Even if he does, every extra year he waits is one in which he could suffer an injury that will keep their team out. The odds therefore suggest that James Jr. will enter the 2024 NBA Draft as a prospect who, on substance, would have little chance of being selected in the first round.

And this is where it gets interesting. The cynical take on LeBron’s statement is that he is well aware of his son’s ranking as a prospect and is dangling the carrot of his own farewell tour to entice a team to draft Bronny. If that’s his plan, it’s a good plan. From a purely strategic standpoint, taking even a year off a 40-year-old LeBron is well worth the investment of a single draft pick. In fact, James could probably turn his son, a fringe prospect right now, into one of the highest picks in the 2024 NBA Draft.

Last June, Zach Kram of The Ringer measured the typical value of each NBA Draft lottery slot. What he found was that while almost all slot machines had produced great players, the median performance of most choices was quite disappointing. Over the four-year span of their rookie contracts, the No. 8 overall pick is expected to produce 6.8 wins over the replacement using FiveThirtyEight’s WAR metric. Well…James produced 6.6 wins above replacement by their norm this season alone. In just 41 games on a broken roster, James has produced about as much as the No. 8 overall pick would be expected in the first four years of his career.

James should theoretically decline with each passing season, and in some ways he already is. He’s averaging 5.6 free throw attempts per game, a career low, and a commensurate drop in drives per game suggests his athletic decline is limiting how often he can attack the basket. Still, overall, James is scoring 29.1 points per game. This is the third of his career. He made up for it by becoming a better jump shooter and retaining his breakthrough passing ability. James probably won’t be able to lead an elite attack in his 40s, but there’s little evidence to suggest he can’t be part of it then.

Even a non-superstar version of James, earning below market value on what will likely be a minimum or mid-tier contract, is worth a decent first-round pick depending on what those picks tend to fetch in the trade market. . While the days of Toronto giving up a No. 5 overall pick for 34-year-old Charles Oakley are long gone, picks in the middle of the first round are handed out to non-stars quite frequently. The picks that were supposed to come in at No. 18 (Derrick White) and No. 24 (Caris LeVert) were handed out to non-stars at the 2022 deadline. Go back a little further and better picks cost a lot less . The 2017 Wizards handed out the pick that became Jarrett Allen for three months to Bojan Bogdanovic. Suitors fairly frequently deal with subsequent first-round picks for one-year rentals. James might be the most valuable rental player in basketball history.

This value is not limited to what happens on the ground. The economic impact of signing James is far greater. In 2018, SNY’s Ian Begley reported that an ownership group estimated James’ employment would generate around $65 million a year for any team that signed him. The entire surrounding community feels this impact. One study estimated that James would create just under $400 million in value for the Los Angeles economy over five hypothetical seasons with the Lakers. Ticket prices and jersey sales are skyrocketing. Bars and restaurants are crowded. We live in an NBA world in which the Boston Celtics recently gave away the draft pick that became Desmond Bane just to knock Enes Kanter off their luxury tax bill. No matter what their managing directors advise, there will be owners willing to give up better choices for the economic opportunities James has created.

Add it all together and it doesn’t matter what kind of prospect James Jr. turns out to be. His draft stock will depend on how high a pick a team is willing to spend on a year of his father’s service, and the longer James Sr. remains one of the NBA’s top players, the higher that pick will be. to be.