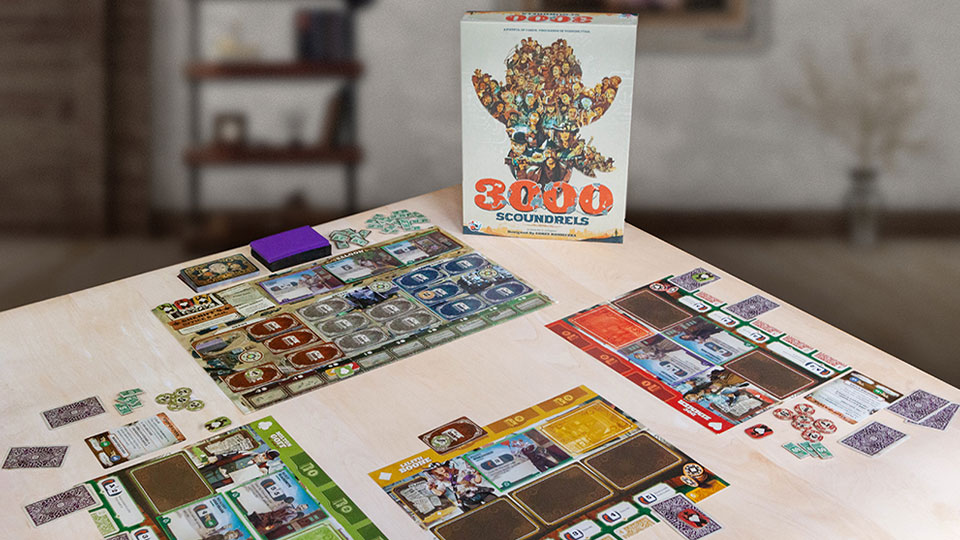 Unexpected Games is thrilled to announce its third title, 3000 Scoundrels, from designer and studio head Corey Konieczka. Players create unique characters, create powerful combos, and outwit their enemies to become the most powerful gang leader in the West. 3000 Scoundrels will launch at select board game retailers later this fall.

In 3000 Scoundrels, 2-4 players step into an alternate history of the Wild West and assume the roles of rival bosses attempting to steal valuable technology left behind by a mysterious man known only as the Traveler. At the end of the game, the player with the most technology will determine the fate of the American frontier. Transparent cards are used to create up to 3000 villains, each with a unique name, artwork, and ability. Up to 50 villains are used in each game, ensuring that every game is different!

Players will need to recruit villains in synergy with their strategy and use them to build an engine to ensure victory. Part of the strategy is misdirecting opponents and choosing when to bluff. But, if players are caught cheating, they are penalized. 3000 Scoundrels includes 60 clear job cards, 50 trait cards, 4 leader sheets, 28 poker cards, 8 strategy cards, 1 game board, and more.

3000 Scoundrels designer and studio head Corey Konieczka began his career at Fantasy Flight Games in 2005 and is best known for his work on beloved games such as Battlestar Galactica: The Board Game, Star Wars: Rebellion and Mansions of Madness: First

Editing. Konieczka left his position as vice president of research and design to found Unexpected Games in 2019.

Since then, Unexpected Games has exploded in popularity with their first release, The Initiative, and reached No. 1 on BGG’s Hotness list and No. 1 on Amazon.com’s Best-Selling New Board Games list. first two weeks after its release. Their second title, Voices In My Head, was released in 2022 and received praise for its experimental playing style.

Hasbro turns Wordle into a board game