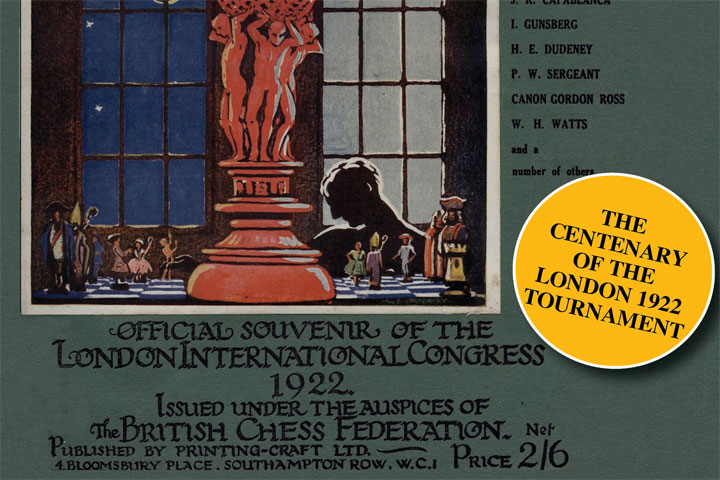 THOMAS RAYNER DAWSON, M.Sc, AIC, born 1889 in Leeds, follows the bent of his famous uncle, the late James Rayner, who edited the problems section of the British Chess Magazine for many years. Dawson, learning chess at the age of 12, like Bernard, was pushed into the tradition of problems by the game’s lack of opponents. His first two-man move was published in 1907, but he soon realized that chess, as played, would not satisfy his strong penchant for all forms of puzzles. In his own words, “appalled by the monotonous similarity of direct materials”, Dawson took up the study of “Fairy Chess”, in which composers create their own fanciful playing conditions, and found here such a vast and fascinating field that it has produced nearly 2,000 chess puzzles over the past 15 years. Dawson is a leading chess publisher and runs highly popular columns in the “Chess Amateur” and the Italian “L’Alfiere di Re”.

The Oxford Companion to Chess (1996) describes it in the following terms:

“English composer, pioneer of both fairy problems and retrograde analysis. His problems in these areas form the bulk of his output (about 6,500 compositions) and are better known than his orthodox studies and problems. For fairy problems, he invented new pieces: grasshopper (1912) LEO (1912), NEUTRAL MAN (1912) NIGHT RIDER (1925) and VAO (1912); he codified new rules such as the maximummer (1913) and various types of production engines; and he used unorthodox boards.

In the period from 1919 to 1930 he wrote a column dedicated to the problems of fairies in Chess Amateur. He was one of the co-founders of The Problemist in 1926. From 1931 to 1936 he was editor of The Problemist Fairy Supplement and eventually moved on to The Fairy Chess Review (1936 until his death in 1951). He was president of the British Chess Problem Society from September 1931 to 1943.

During his career he composed some 6,400 problems and 150 studies.

Far from failures, TR Dawson (a graduate in chemistry) worked in the rubber industry where he made a name for himself.

TR Dawson, editor of BCM Endgames and Problem, on the London 1922 tournament:

Having never attended a chess congress before, I went with an open mind, prepared for whatever I found. Chess congresses, I soon learned, are not really for chess, but only for the game of chess. There is, however, a social side to the convention that is pleasantly good – saying “How are you?” to people you’ve exchanged letters with for years and never met before is pretty exciting.

My day there covered the 5th round of the main tournament and provided a variety of more or less noteworthy incidents. The first hour of play was extremely boring. Only the most ardent enthusiastic students of the openings can be interested, in the first fifteen sonorous and unflappable first strokes of these master games. The three deep tight rows around the Capablanca plateau indicated, indeed, that a classic hero was more appealing than mere openings. During this period, I wandered, a lost and inconsolable problem seeker, looking for distractions. Not being able to pursue my knowledge of Wahltuch, Watson and Yates beyond nods, during their serious board struggle, I was happy to shed some light on our awesome Issue Editor and Dr Schumer. The latter gave me some amusing thoughts, as referring to my predilection for humor and fantasy, Dr. Schemer waved at the players with the comment: “These are serious failures, of course.” I admit the “serious”, but I doubt the “of course”. I lazily thought these masters put four or six hours of hard thinking into a game – and that’s pretty exhausting, with some of them obviously tired at the end of the day. But we problematists think nothing of 20, 40, 100 intense hours on a single problem. There’s two of my retro issues that took me six years of on-and-off work – at one estimate, a thousand hours – to complete, and I’ve got about 20 more that I’ve worked on for ten years, and they always confuse me. This, “of course”, is not a serious game of chess, I presume.

The first slight excitement of the day developed during the Marotti-Yates match. The Italian player, apparently a little outclassed in this tournament, made a miserable move that lost a pawn and the exchange, and resigned on the spot. Otherwise, the game could have been very interesting, as it featured a definite strategy structure. Yates was meeting a promising attack on his K-side castling king by a vigorous counterattack on a Q-side castling king, and with the pieces so distinctly angled, a rare run for the telltale first move seemed due.

Somewhere around this time, the thickening of the crowd around the Morrison-Euwe board indicated events, and the well-known gambler and problem player, Mr. FFL Alexander and myself were perched on chairs at the back of the crush for have occasional glimpses of the painting. . As no movement occurred for ten minutes or more, Alexander and I immersed ourselves in a pocket chart and a lore of trouble, unaware of the crowds, the game, or our own precarious elevation. The absurdity of standing in chairs to solve problems, instead of sitting down, only occurred to me when I was reviewing the day’s events for this journal.

However, the game continued in spite of us and we woke up from the dreams at the next critical position (Diagram 1).

Clearly, the young Dutchman would enjoy a dose of trouble as he played the miserable move, Rxd2, leaving the Canadian with a single checkmate in two and a well-deserved win.

Contemporaneous with the preceding events, and on the next chessboard, two seasonal warriors, Reti and Tartakower, fencing elegantly in the last moments of a delicate ending (#3).

Figure 4 gives the Wahltuch-Maroczy game at adjournment for tea, White to play. This complex block position ended, in the evening, after about ten moves, in a draw by perpetual tacit failure. On a tense move, Marozcy pondered 37 minutes, seeking victory in vain. I fortunately hit the moment, after the ruling, when a “frog pond,” if I may apply irreverent Americanism to our foreign visitors, from Bogoljubow, Capablanca, Reti, Rubinstein, Vidmar, and others, dissected the position. Readers of these irresponsible notes will enjoy exploring an enticing attack that was offered in diagram 4-vi., Ra7. followed by Pc5—when fur and feathers fly. But the gem of the evening, and the only chess game of the whole day that I really enjoyed, came from another line of play, summing up the following ending of Pawn:

The ‘frogpond’ dialogue was about:

Wahltuch: “Could I have won that pawn end modification by changing everything?”

Maroczy: “Never in your life! The end is drawn.

Wahltuch: “Ha- Better not take it. You must roll back your king.

And the frog pond chuckled and tried something else. Of course, this sparkling piece of fencing was no serious chess game – it was way too pretty for that.

The other games on the tour, which I haven’t mentioned, were all too boring to elicit comment. I came out of my first day at a convention very happy not to be a professional reporter of such facts.

The above article originally appeared in the July 2022 issue of The British Chess Magazine, oldest chess publication in the world. It is reproduced with kind permission.

BCM covers the international and British chess scene. In a mix of coverage of current events and thought-provoking analyzes of the most current issues in the chess world, BCM gives readers what they need to understand and appreciate the Royal Game and its wider context in society. BCM’s interviews with top players and major chess world influencers and participants (actors, businessmen, artists, politicians, world chess administrators), detailed game analysis and historical articles provide in-depth coverage chess events and broader chess themes.

Published monthly, each issue of The British Chess Magazine contains 64 pages filled with exclusive articles and annotations. You can buy a subscription (£55 per year, £4.58 per issue) or download sample copy free.