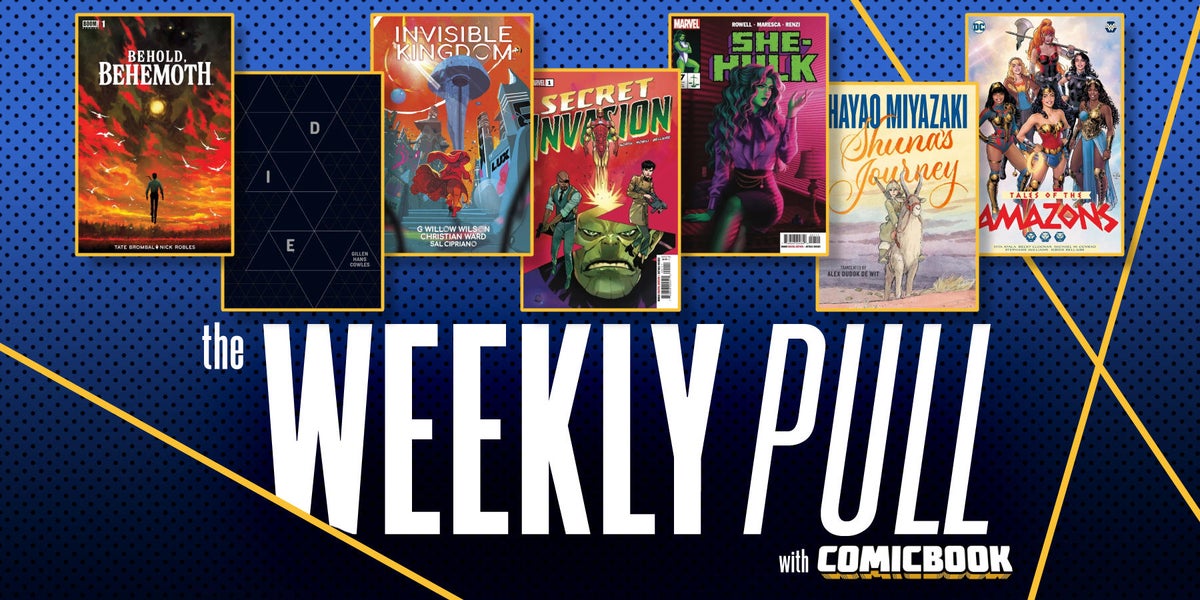 The Weekly Pull: She-Hulk, Behold Behemoth, Tales of the Amazons, and more

It’s almost another new comic book day, which means new releases are hitting stores and digital platforms. Every week in The Weekly Pull, the comics.com The team highlights the new releases that have us most excited about another week of comics. Whether these releases are from the biggest publisher or a small press, brand new issues of ongoing series, original graphic novels, or collected editions of older material, whether it’s capes and hoodies or any other genre, if that got us excited about the comics this week, then we’re going to tell you about it in The Weekly Pull.

This week, a new episode of She-Hulk, Boom begins Behold, Behemoth and DC releases Tales of the Amazon. Plus, a missing piece of Studio Ghibli history, Marvel’s new Secret Invasion series, and hardcover editions of DIE and Invisible Kingdom.

Which comics are you most excited about this week? Let us know what new releases you’re looking forward to reading in the comments, and feel free to leave some of your suggestions as well. Check back tomorrow for our weekly reviews and again next week for a new episode of The Weekly Pull.

Boom Studios has established itself as one of the most exciting publishers of new comics and has maintained that reputation admirably over the past few years. In addition to the consistent quality of licensed works, creator-owned concepts from some of the most notable talent in direct-to-market comics have given readers exceptional series like past and future, something kills children, Heather, Damn them all (just last week!), and much more. It seems Behold, Behemoth is set to join those illustrious ranks this week. Screenwriter Tate Brombal (house of slaughter) and artist-extraordinary Nick Robles (The Dream: Waking Hours) combine to tell readers a story of immediate tragedies and nightmarish terrors. The series centers on Greyson, a social worker haunted by apocalyptic dreams, dealing with both the loss of his own brother and a murder related to his new ward. Given Robles’ transported and ethereal style of work, the weaving of nightmares and reality into a powerful new framework makes Behold, Behemoth one of the most promising starts to 2022. Readers should be thrilled (or maybe a little scared) to find out where it leads from Wednesday of this week. — Chase Magnett

Role-playing games have been part of a cultural zeitgeist for several years, especially during the pandemic, and Kieron Gillen and Stephanie Hans DIE perfectly captured this moment. The story follows a group of friends who become trapped in the fantasy world of a tabletop role-playing game as children and manage to escape at great expense, only to be brought back to this world at adulthood. Gillen uses this premise to examine the roots of role-playing games in war games, board games and the fantasy genre, while weaving a personal story about how and why we create fictional identities for ourselves, ones that can often reflect something that we are not. ready to admit openly. Stephanie Hans’ dreamlike artwork perfectly captured the surreality of the story, and now it’s all collected in one great hardcover collection that’s worth anyone’s time, but especially valuable to those who have sat down around a table and pretended to be someone else with friends. –Jamie Lovett

After DC closed the Vertigo Comics imprint, legendary publisher Karen Berger moved in with the Berger Books imprint at Dark Horse Comics. One of his most memorable stories is unseen realm, the story by G. Willow Wilson and Christian Ward about a nun who discovers the hidden connection between her religion and the only other organization in her interstellar society to wield so much power and influence, a venture that fundamentally Amazon in the space with a monopoly on just about everything. The themes are powerful and relevant, and Ward’s colorful illustrations are stunning page after page. All three volumes are now collected in one enormous hardcover library edition that is sure to be a treat to behold. –Jamie Lovett

With the imminent return of Skrulls to the MCU on Disney+, it was inevitable that Marvel Comics would produce a miniseries that shared the title. Secret Invasion. However, the origin of a tie-in series is no guarantee of success or failure – just a cause for its title. Secret Invasion #1 already has me a lot more excited than the TV series due out in early 2023 based on the talent involved. Writer Ryan North arrives on The Fantastic Four next week and remains one of the most innovative, humorous, and creative writers working in American comics today. With past works spanning the cosmos and including all sorts of wondrous concepts, North is perfectly suited for an interstellar spy adventure. Combined with a powerful art team and additional pages in issue 1 and Secret Invasion is already well prepared to fend for itself. The fact that it features Marvel’s favorite badass like Maria Hill and Nick Fury is a guarantee for plenty of fun and thrills to come. Whether it’s a tie-in, spin-off or marketing mandate, Secret Invasion is perfectly prepared to rise above its origins. — Chase Magnett

This current She-Hulk run has encompassed so much of what I love about Jennifer Walters comics, and this issue is absolutely no exception. As Jen’s romantic, professional, and personal life becomes much more complicated, this issue brings some real surprises in the form of character cameos, plot twists, and more. I’m impressed with how Rainbow Rowell threads the proverbial needle of this series, and Luca Maresca’s art is an energetic and delightful complement to it all. If you even casually loved She-Hulk’s recent MCU debut, you owe it to yourself to check this run out. —Jenna Anderson

Hayao Miyazaki is an animation icon, one of the few talents in Japanese animation who might be considered a household name even among casual fans of the medium. While his Studio Ghibli features are easy to find in the United States thanks to deals with major studios, Miyazaki has a surprising amount of manga and TV work that’s only just beginning to officially make its way to the United States. The last is Shuna’s Journey, being published in the United States by First Second book switch a translation by Alex Dudok de Wit. It is Miyazaki who puts his spin on a Tibetan folk tale that travels to the realm of the gods. Although it’s almost more of a storybook than a comic, there are elements here that Miyazaki would clearly build on in future stories, especially Nausicaa of the Valley of the Wind (another great comic by Miyazaki before he turned it into a movie) and Princess Mononoke. Shuna’s Journey is like a missing piece of the Miyazaki puzzle and should be sought out by all fans. –Jamie Lovett

Tales of the Amazons

One of the greatest joys of the last few years of DC comics has been seeing the Wonder Woman family flourish, with Nubia, Yara Flor and other “sidekicks” having the opportunity to thrive outside of Diana. . This week Tales of the Amazons provides an easy and accessible way to dive into these tales, collecting back-up stories from past wonder woman problems, as well as solo spotlights for Nubia, Artemis, and even the pantheon of gods. There’s a lot to love about these pages, even if you haven’t followed the Amazons status quo so far. —Jenna Anderson

Oh no! Shweta’s game begins, Give Dhara a suggestion