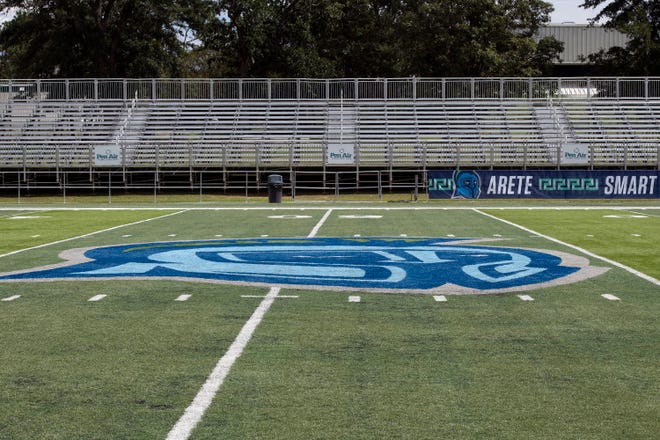 The UWF is ready for the first football game on campus on Saturday. What there is to know:

When the lights come on and the teams are sold out for Saturday’s Division II college football game, history will be written at the University of West Florida.

The No.1-ranked UWF Argonauts are days away from playing a regular-season game on campus for the first time in the team’s already illustrious five-year history.

“Everyone is excited,” UWF athletic director Dave Scott said on Wednesday. “This is the opportunity to host a very first game on campus. You know with football we have hit a lot of milestones over the years, every year seems like a new milestone. And this one will be the first game in history actually at the University of West Florida, and everyone’s excited. “

The UWF and the Bearcats at Southwest Baptist University in Missouri collide on Pen Air Field, a setting usually reserved for Argos training, on Saturday. The UWF play their home games at Blue Wahoos Stadium, but when the Wahoos’ 2021 schedule was released last spring, there was a dispute on September 11 when the Argos and Wahoos were scheduled to play on that date.

So the UWF decided to make lemons out of lemonade and put together a historic plan for the game against the Bearcats. Logistically, it took months of planning to build the play equipment and install bleachers, which will be available to season ticket holders on Saturday on a first come, first served basis.

At kickoff on Saturday, Scott said he expects between 2,500 and 4,000 people to be in attendance.

“We had to bring in game clocks so we got them, we rented a video board and bleachers,” Scott said. “But obviously the bleachers won’t be enough for everyone, so we’ll ask people to bring camp chairs and blankets. Kind of like what we do for the spring games. And there won’t be any. than a lot of standing. ”

“This will transform our program”:University of West Florida School of Music receives $ 8.5 million donation

A temporary fence was also purchased by the school so that it could create checkpoints for ticket access and entry points.

Food trucks will be there for the action, especially Sonny’s BBQ, Joe’s Caribe and Greek’s Catering and Aramark. Coca-Cola products and beer options will also be available for purchase during the game, and the food court will be located behind the stands on the east side of the stadium. Pen Air Federal Credit Union also offers free hot dogs to all current members at the south end of the stadium.

The Argos have made Wahoos Stadium their home in large part because it has more capacity than Pen Air Field.

“We’ve been in the top 25 for the last few years in a row, so obviously the stadium and its accommodations have played an important role,” said Scott.

Scott said based on Saturday’s overall experience, discussions may start soon to make campus games a semi-regular event. Or even, a regular event.

“We will learn a lot from this Saturday,” Scott said. “Obviously the Wahoos and the City of Pensacola have been great partners that it’s great to work with, but the goal has always been to come to campus. It will be a good litmus test to see where we stand. are.”

Entrance to the stadium: The stadium gates will open at 5 p.m. There will be three ticket office entrances where fans can have their ticket scanned. These entrances are located at the north, south and west ends of Pen aerodrome. The school is asking fans to arrive early to avoid the long lines.

Tickets: Fans are strongly encouraged to purchase tickets online before match day due to the number of spectators expected. The box office will be open at 3 p.m. on game day and is located on the north side outside of UWF Field House. Online ticket prices are $ 23 for adults and can be purchased at goargos.universitytickets.com.

As a reminder, there is no re-entry on match day.

Promotions: The UWF is aiming for a “blue out”, so come dressed in your best Argo blue outfit. UWF spectators attending the match will receive UWF mini football. The first 500 UWF students to enter the game in the North Zone will receive a blue Nike football jersey courtesy of SGA.