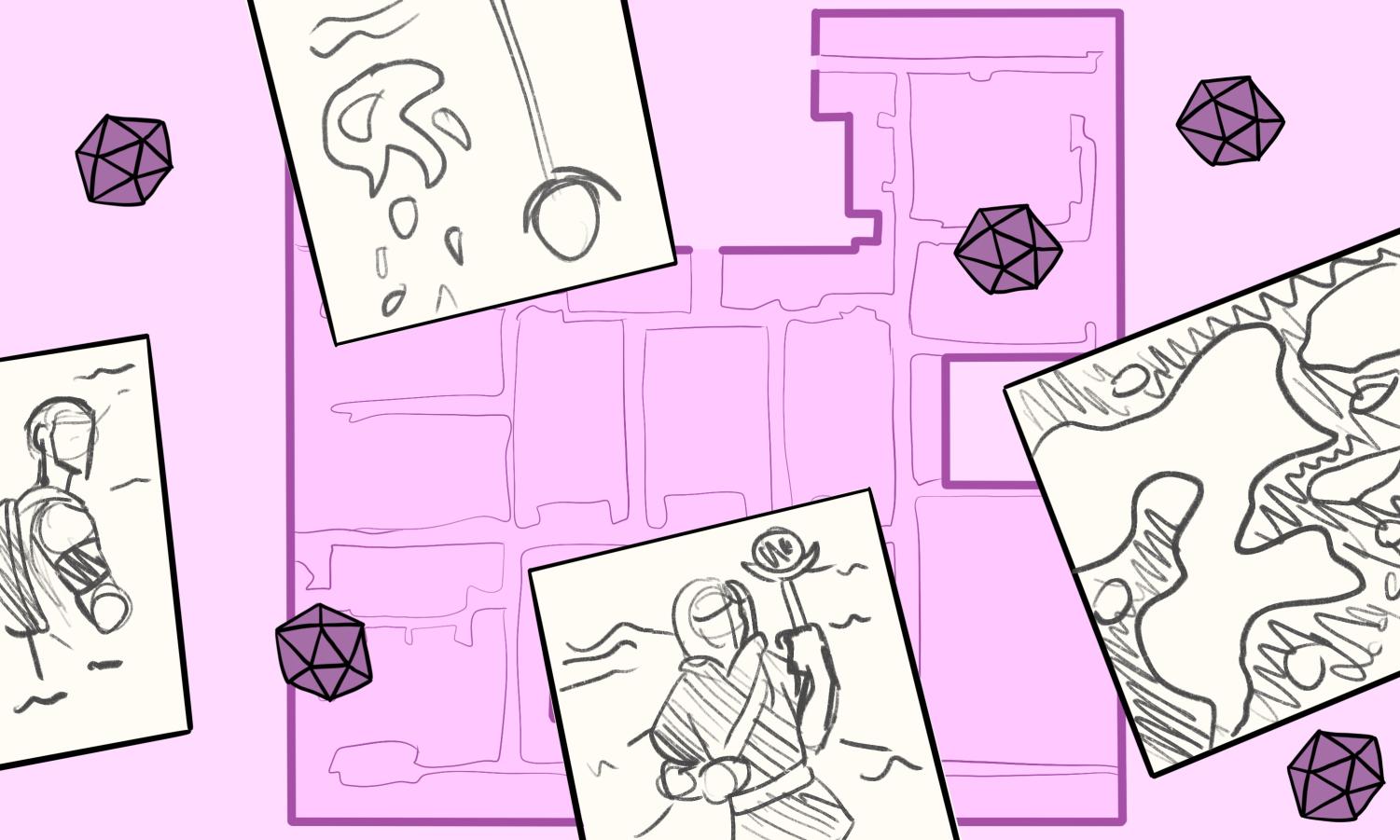 A century-old sci-fi odyssey. A quest to resurrect a 15-year-old orphan in a medieval fantasy world. A wizard named Chad who exclusively wears jorts. What could these things have in common? The students created all three as part of the collaborative storytelling aspect of Dungeons & Dragons.

In D&D, players create their own characters and, with the help of a dungeon master who oversees the story telling, they work together to complete a task over many sessions. Players roll multi-sided dice to determine their characters’ powers and actions.

First-year communications student Brenden Dahl said he started playing D&D after a friend recommended it. They had been in theatrical productions before, but had “never really embraced anything as truly cheesy as Dungeons & Dragons.”

“When I did (kissing her), I loved it,” Dahl said. “I think it’s a really generous, fun, exciting, silly culture around tabletop games.”

Despite the positive culture, a host of stereotypes accompany D&D’s corny image. In the 1980s, D&D gamers were suspected of engaging in satanic rituals, and later, of being hopelessly corny. While the stereotypical D&D gamer was a middle school boy – think “Stranger Things” – D&D gamer demographics have since become much less male-dominated. In 2017, approximately 40% of D&D players were female.

Weinberg’s freshman Ayana Davies first encountered D&D during her freshman year of high school and continued acting through her sophomore year. However, the friends she played with were all men and she attended a boarding school where she was not allowed in the male dorm, she said. So she launched her own online campaign.

Davies said D&D is a vehicle for self-expression. She said her online campaign, which she has led for more than two years, encompasses multiple intersections of identity.

“It’s the kind of fun thing about D&D or any tabletop campaign: you create your character. So you can say, ‘This is who they are’ and then for about an hour or two , just say, “I guess I’m that person now.”

Medill freshman Olatunji Osho-Williams decided to create his own campaign and play it with friends when the pandemic started. The original campaign turned into a hundred-year-long odyssey into the world he built.

“It was just a six-month adventure that I will never forget,” Osho-Williams said. “I was having a wonderful time with my friends.”

His experience as the Dungeon Master of this campaign led him to join Northwestern’s Tabletop Club, which builds community through board games.

Davies, Dahl, and Osho-Williams all acted as dungeon masters in their campaigns, meaning they took charge of planning the story, telling it to participants, and sometimes solving problems when characters made unexpected decisions.

For Dahl, who also writes plays, the collaborative elements of D&D are what makes it worthwhile.

“To me, that’s what art is – creating to entertain each other,” he said. “And whether it’s happening on a stage in front of hundreds of people, or in someone’s basement around a table, either way, it creates stories for each other.”

But all three said the best part of D&D is, of course, the friends they’ve made along the way, even the ones that get sidetracked and go off-script – or accidentally summon a god and remake the whole world. , as Osho-Williams did.

He was not disturbed, however.

“You literally roll with the dice,” he said. “No pun intended.”