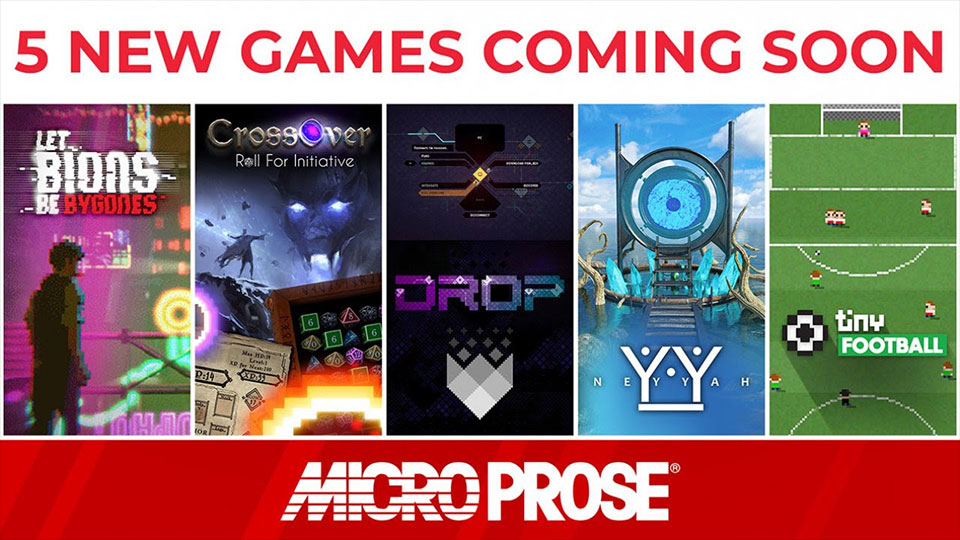 MicroProse is back to announce new games that join its lineup. This time it’s about stories, atmosphere, exploration, but also intrigue and even sports!

All five games have new trailers. So, without further ado, let’s explore each of them.

You are thrown into a strange secret world called Neyyah. Use careful observation and logic to uncover the mysteries intertwined in Neyyah’s peculiar landscapes and bizarre cultures.

Neyyah is a first-person point-and-click adventure game, set in a collection of remote, nearly abandoned islands separated by a series of complex portal machines and intertwined with the fingerprints of two very intriguing cultures.

Upon awakening from a strange dream, you find yourself transported to a place called Olujay, where you meet Vamir, who sends you to Neyyah in the hopes that you will be safe there. For reasons that you will discover during your many explorations, Vamir needs you urgently.

That the Bions have passed

Let Bions be Bygones is an atmospheric narrative future-noir thriller.

Having lost everything, a retired detective and badass, John Cooper, must attend to one last case to find an upper-class girl missing among the lower parts of the dystopian city-planet, Terrahive.

A fresh take on the classic genre, Let Bions be Bygones, allows players to focus on story, narrative, and detective work. Players will be able to choose their own path and develop their characters through different playstyles.

All this and more, in a gritty world captivated by an original, unique soundtrack and professional voice-over that will immerse the player in a thrilling tale with multiple endings.

CrossOver takes some classic concepts from traditionally ‘casual’ genres (Match 3 and Tower Defence) and interweaves them in a quirky new hardcore challenge with strategy, RPG and puzzle elements.

The main campaigns include RPG progression, dozens of spells and weapons to find, mercenaries to hire, and shops to buy armor and items. Random encounters appear between stages with Fighting Fantasy book style choices. Earn persistent gems to unlock more classes/races (15 of each in-game) or exchange them for extra gold during any campaign.

Try your luck in endless single-player and co-op modes to challenge the online leaderboards!

DROP is a rogue-like hacking simulator set in a fragmented future.

You are a freelancer, trying to gain notoriety in DROP, an anonymous system for hackers. You enter digital enclaves and leave without a trace, only to find yourself in a conflict between various agencies that could change the world.

Step into a disconnected cyberpunk world – the unique visuals, exclusive soundtrack and electronic soundscapes evoke the feel and thrill of hacking in a potential future. Play a story campaign that unfolds through unique missions.

Explore the opportunities offered by the many factions with their own agendas and missions.

Mini games – prove yourself in the various additional challenges during the missions.

Easy to use – simple commands with keyboard or controller.

Tackle, pass and shoot to the back of the net.

On the couch or online. Settle your old accounts!

Tiny Football is a throwback to the old retro football games descended from the 90s. Master the art of passing and shooting, tackling, crosses, ball throws, overhead kicks, free kicks, and more . Compete against 64 national and club teams in a variety of tournaments.

Rich gameplay and true challenge are achieved by sharing user control with AI assistance to produce passes and shots based on the player’s individual abilities.
The randomness of passes and shots, even when playing against the AI, will still have an impact on player behavior, and “lucky fluke” objectives will provide additional excitement.

Each team member has their own skill level and players can be pre-selected before a game and replaced during a game when they get tired.
Injuries during the match will force substitutions. Ejected players and player suspensions will force players to shuffle team selection, adding a managerial touch to tournaments.

Additional features include goal celebrations, player protests, extra time and penalties. Play with a friend (controller and keyboard) or the computer.