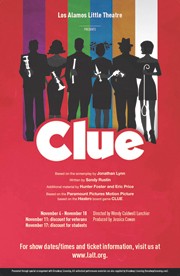 Clue On Stage by LALT is a triumph!

When Los Alamos Little Theater (LALT) announced it was presenting a stage version of Clue, I was over the moon. Growing up, I thought Clue was the bomb. I loved the board game, the video game and the books.

When I first watched the movie Clue in my sixth grade, it became one of my favorite movies. Everything about the film, in my mind, is sublime – from the slapstick comedy to the witty exchange of puns.

Would the play live up to the comedy film classic? Indeed it does!

Director Wendy Caldwell Lanchier’s version is a clever and fun adventure. It follows in the footsteps of the 1985 film in terms of story – six strangers meet at Mr. Body’s mansion for a dinner party hosted by the butler, Mr. Wadsworth. The guests, who attend the party under aliases – Mr. Green, Colonel Mustard, Professor Plum, Miss Scarlet, Mrs. White and Mrs. Peacock – discover that they are all being blackmailed. What happens next is a chaos of murders, jokes, gags and lots of laughs.

While the piece certainly follows the steps of the film, it deviates and goes its own way. I enjoyed that some dialogue and scenes in the play varied from the movie, and just like how each round of the board game ends differently, the play offers different conclusions than the movie.

One of the biggest accomplishments is the sets. I wondered how, on a small stage, LALT would manage to mimic the six-room layout of the iconic board game and even how it would incorporate the secret passages. But Brad Gregory, who led the set design, construction, lighting and sound design, is a genius. Two walls would be maneuvered and folded back to make it look like the characters were leaving one room and going into another. Under Kelly Dolejsi’s ​​expert hands, light was skillfully used to shrink the space to make it look like the actors were huddled together in a hallway or to show they were in a large room. Likewise, she used sounds to give the impression that the actors were really walking through a hidden, dark passage.

The music by pianist Margaret-Mary Sauppe between scenes was another fantastic element.

I also loved how the actual board game is presented in the sets as well as a pair of dice.

The film version had some heavy hitters in its cast: Tim Curry, Madeline Kahn and Christopher Plummer, to name a few. But the actors of LALT have shown that they can take on these big players. They may be murderers, but you can’t help but love Michael Dolejsi’s ​​naive, clumsy Mr. Green, Don Monteith’s clueless Colonel Mustard, Kelsey Denissen’s sharp-tongued, seductive Mrs. Scarlett, the lusty Jonathan Guise’s Professor Plum, the Southern-accented Mrs. Karen McMullen. Peacock and Alex DiBranco’s black widow, Mrs. White.

Kudos to Matt DeSmith as Wadsworth. His role requires a lot of physical feats and he pulled it off effortlessly. Holly Robinson is a real flirt like sexy French maid Yvette and I kind of wished that Thanos Stamatopoulos’ Mr. Body didn’t get ‘beaten up’ so quickly so he could be on stage a bit more.

I also have to thank the costume department, which includes Lisa-Jo Dunham and Emily Hildebrand. The entire cast looked fantastic in their 1950s-inspired outfit, but the star is McMullen who is credited for her own costume. I loved her peacock feather headdress and her cat eye glasses.

I heard that when the movie came out it didn’t do as well at the box office, but it got a cult following. I am definitely one of those followers. So I imagine the cast and crew of LALT felt it was no small task trying to measure up to the beloved film. But they did.

In fact, I would be as bold as going further. The final scene of the play and the last dialogue mirror those of the film. The film’s Mr. Green jokingly tells J. Edgar Hoover to take the murderers away and that he is going home to have sex with his wife. In the play, Michael Dolejsi as Green says those same words, and then his wife, Kelly, playing the police chief, jumps into his arms. Knowing that they’re a real couple makes the scene even sweeter, smarter – and dare I say – better than the movie.

LALT’s Clue: On Stage will continue at 7:30 p.m. on Fridays and Saturdays through November 18 at the Performing Arts Center, 1670 Nectar St., with a 2 p.m. matinee on Sunday, November 13 and a special 7 p.m. performance on Thursday, November 17. november. .

Tickets are on sale at https://www.eventbrite.com/e/clue-on-stage-tickets-453647210017 or at the door from one hour before the show.

Are payday loans safe? Here’s how to protect yourself