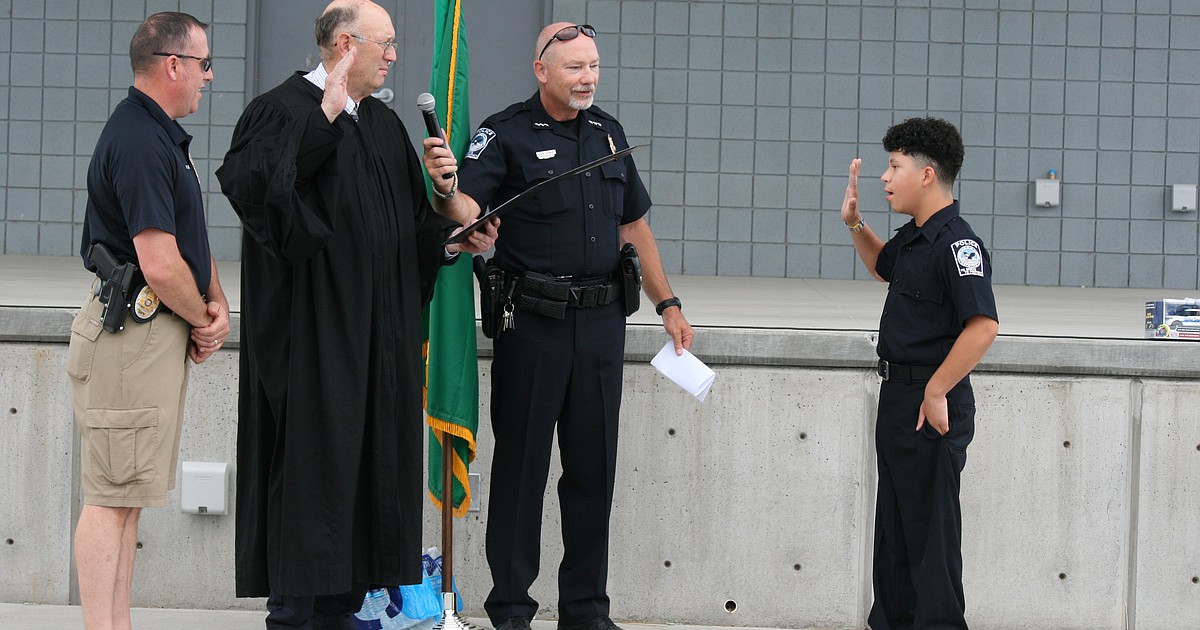 Chef for a day, lots to do at Quincy National Night Out

QUINCY – The leader for a day was sworn in – by a judge too – there were police cars and police motorcycles, fire trucks, games, fun cars, hot dogs and ice cream. There was plenty to do and see at National Night Out sponsored by the Quincy Police Department on Monday night.

Chief for a Day Christopher James was sworn in by Grant County Superior Court Judge John Knodell. James is 12, which QPD leader Keith Siebert says is the right age.

The Chef for a Day program allows children with disabilities or with chronic or life-threatening illnesses to spend a day just for fun.

“Chef for a Day gives kids a chance to forget about the long-term disability they have and just celebrate with their family being the chef for a day,” Siebert said. “Almost all kids love the pageantry of being in law enforcement – ​​they love our cars with the flashing lights. We just try to honor them as much as possible and help them enjoy the day.

The leader for a day receives a uniform and badge, which in James’ case was pinned by his mother Yesenia and father Joseph. Additionally, James will ride with the QPD in the parade on Farmer and Consumer Awareness Day in September.

The leader for a day is chosen from children nominated by Quincy School District staff, local churches, other organizations and sometimes people in the community, Siebert said.

Traditionally, the Chief for a Day is a countywide event led by the Grant County Sheriff’s Office, involving law enforcement and firefighters from across the county. The countywide event has been canceled for 2022 and QPD has decided to make its own, Siebert said.

“We decided this was such an important event for our police department and our community that we had to make sure it happened,” he said. “We thought a great way to do that was to combine it with National Night Out.”

National Night Out filled Lauzier Park with interesting law enforcement agencies and gear, from QPD patrol vehicles to GCSO motorcycles and a command vehicle. There were fire trucks and the Washington State Patrol was handing out plastic WSP hats to kids. Organizations had lots of games – that ring toss was really hard – and information, and lots of gifts and food. The Grant County C-10 Auto Club hosted an auto meet, with a raffle for children’s bikes.

“We want to give something back to our community,” said the car club’s Jimmy Tarango.

“I would say that’s a pretty good turnout,” said QPD Sergeant Julie Fuller, the NNO organizer, as she dipped roasted corn on the cob in a pot of melted butter. Quincy businesses and organizations provided a lot of support, Fuller said, including cash donations, and when organizers had to buy things, they received a reduced price.

Children could climb into the fire truck and operate the siren, and it became very popular when the children learned that everything was fine, just this once. Grant County Fire District 3 Chief Tony Leibelt said NNO gives the department a chance to show people what the fire department is all about.

“That seems like a good fit, if you ask me,” Leibelt said.

The children sat on the GCSO motorbikes, their parents taking photos. Quincy Valley Medical Center officials were there with a beanbag toss featuring the patient from the board game Operation. The children played a game using spheres made of sponges instead of water balloons.

The large bus full of equipment that serves as the GCSO’s command post was open for children and adults to take a look around. Children could obtain adhesive badges from the GCSO and the WSP. WSP’s Bryan Villanueva said events like National Night Out are a good way to connect with the community, and WSP soldiers try to attend as many community events as possible.

The parking lots around Lauzier Park and the adjacent street were filled with cars, and the park was full of children playing on a sunny, warm, but not too hot, evening.

Cheryl Schweizer can be reached at [email protected] To learn more about Cheryl’s content, download the Columbia Basin Herald app, available for Android and iPhone.