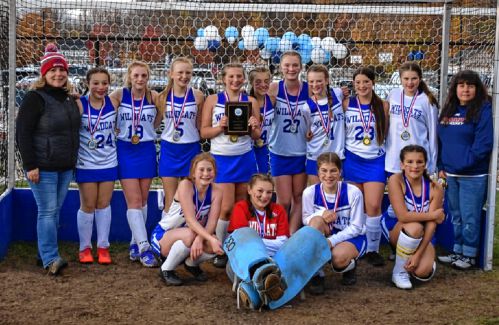 â–  The Merrimack Valley Middle School field hockey team ended the season with a 1-0 loss to Hampstead in the championship game. Abbie Thompson and Lauren Bailey worked hard in the midfield to secure transitions and get the ball across the pitch. On defense, Sammy Baker played well to help protect goaltender Morgan Brechtel.

Winter sports registrations at Hillsboro-Deering High School will be available online until November 29 at https://www.hdsd.org/Page/1465. All parents / guardians must complete all requested forms and information. The following sports (with start dates) are: bowling and winter spirit (Nov 15), Alpine skiing (Nov 22); and boys ‘basketball, girls’ basketball and ice hockey (November 29).

New England College Men’s Ice Hockey The team is looking for a JV / Assistant Coach for the 2021-22 season. The ideal candidate will be responsible for organizing and mentoring the JV team, as well as the potential to help the college program. The NEC JV program is hands-on, plays a number of games and includes a stipend. Please email Tom Carroll at [email protected]

Apprentices are needed for the New Hampshire Wrestling Officials Association for the 2021-22 season. A minimum of two years of participation in the sport of wrestling as an official, coach or wrestler is required. Contact NHWOA President Rick Ross at 396-8238 or Deputy Commissioner Jim Charland at 738-0216.