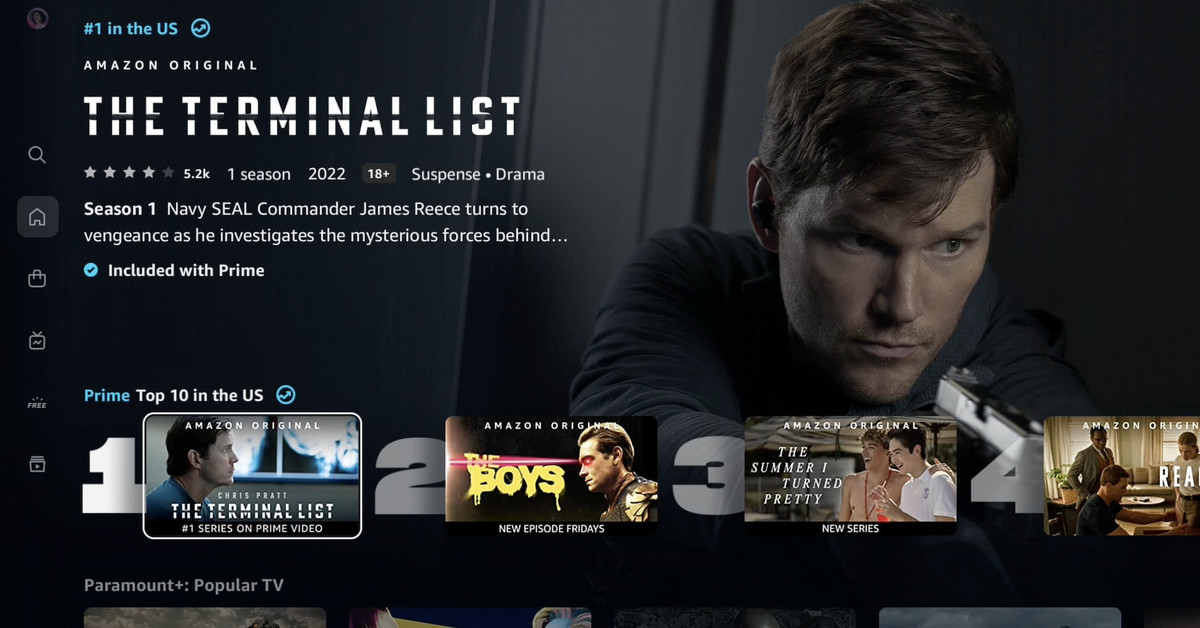 Compared to Netflix, Disney Plus, and other major streaming services, Prime Video has never been the sleekest or most intuitive app. Its user experience lacks the polish of those competitors and feels more cobbled together. There are good aspects to what’s there – like the long-running X-Ray feature that displays cast information and other trivial facts whenever content is paused. But Prime Video hasn’t seen a significant revamp or overhaul in many years.

Well, that’s changing today. Starting now and over the next two weeks, Amazon will be rolling out a new Prime Video experience for Android and connected living room devices, including smart TVs, Fire TV streaming hardware, Roku, Apple TV, Android TV, and game consoles. Amazon says the experience was designed to be “less busy and overwhelming for our customers.” The result, frankly, is something a lot like Netflix. And maybe that’s for the best.

Prime Video’s main navigation has moved to the left side of the screen and is now a vertical column of icons. These six main areas are Search, Home, Store, Live TV, Free, and My Stuff. The Home section has subsections for Movies, TV Shows, and Sports. And the store has similar submenus for Core Channels (i.e. Subscriptions), Rentals/Purchases, and Offers.

There’s now a top 10 list on the home screen so you can easily reference what’s popular, and the new Prime Video is much clearer about what entertainment is included with your Prime membership. These shows and movies are denoted by a blue checkmark in the description, while content that requires rental or purchase will have a gold shopping cart icon. It’s cleaner than adding a badge to every TV show or movie artwork like Amazon used to do, though it does mean you’ll have to dig a bit into the listings to see what’s what.

As you browse, you’ll find that many carousels retain the same landscape artwork as before. But Prime Video has also introduced what it calls “super carousels”, with poster-style portraits that turn into a video preview when you hover over a selection. Again, catch me if you’ve seen this concept elsewhere.

The Prime Video redesign was an 18-month project. As the finish line neared, the new experience was overseen by Ben Smith, who is now Amazon’s vice president of product for Prime Video and Prime Studios. Smith is the same executive who spearheaded Hulu’s radical redesign in 2017. Looking back, Hulu tried to reinvent the user interface and pushed too far in a new direction. Customers were quick to air their grievances, and the company spent many months mastering some of the changes and getting back to what was familiar.

By comparison, Prime Video’s redesign is deliberate, calculated, and – as the parallels to Netflix, HBO Max and Disney Plus demonstrate – far less daring. Amazon did extensive usability testing and user research, finding that people generally accepted changes very quickly. Given the growing resemblance between all these apps, that’s not terribly surprising.

In some cases, the goal was to better highlight the underutilized benefits of Prime Video. The new dedicated Live TV hub provides a guide that aggregates linear programming from subscription channels like AMC Plus and Paramount Plus, plus Prime-exclusive live sporting events and free ad-supported content for everyone. This interface is already available on the web but will likely be used much more widely now that it’s so exposed in the Prime Video app. “During usability testing, we repeatedly heard the phrase ‘wow, I didn’t even know Prime Video had live TV,'” product manager Helena Cerna said during a recent press preview. .

Prime Video has a fresh lick of paint and layout, but popular features like multi-user profiles, X-Ray and Alexa integration are still present. As before, you’ll see quite a bit of promoted content, and Amazon is still trying to offer customers subscriptions for third-party content – ​​just as rumors are circulating about HBO’s potential return to the fray.

Some annoyances also remained: Prime Video still presents TV seasons in a weird way (episode 0: trailer, anyone?) and can sometimes separate 4K and HD versions of the same movie. Some of these confusing organizational choices are because Amazon sells much of that content, while competitors only have to worry about allowing you to stream it.

After this initial rollout phase, the new Prime Video design will be coming to iOS and the web in the coming months. However, not all hardware will be able to run the redesigned experience. The PlayStation 3 and 2012’s third-generation Apple TV, for example, won’t be updated. In cases where devices do not receive the new version, they will stick with what they currently have and continue to provide access to Prime Video in the future.

PowerWash simulator: how to change gloves