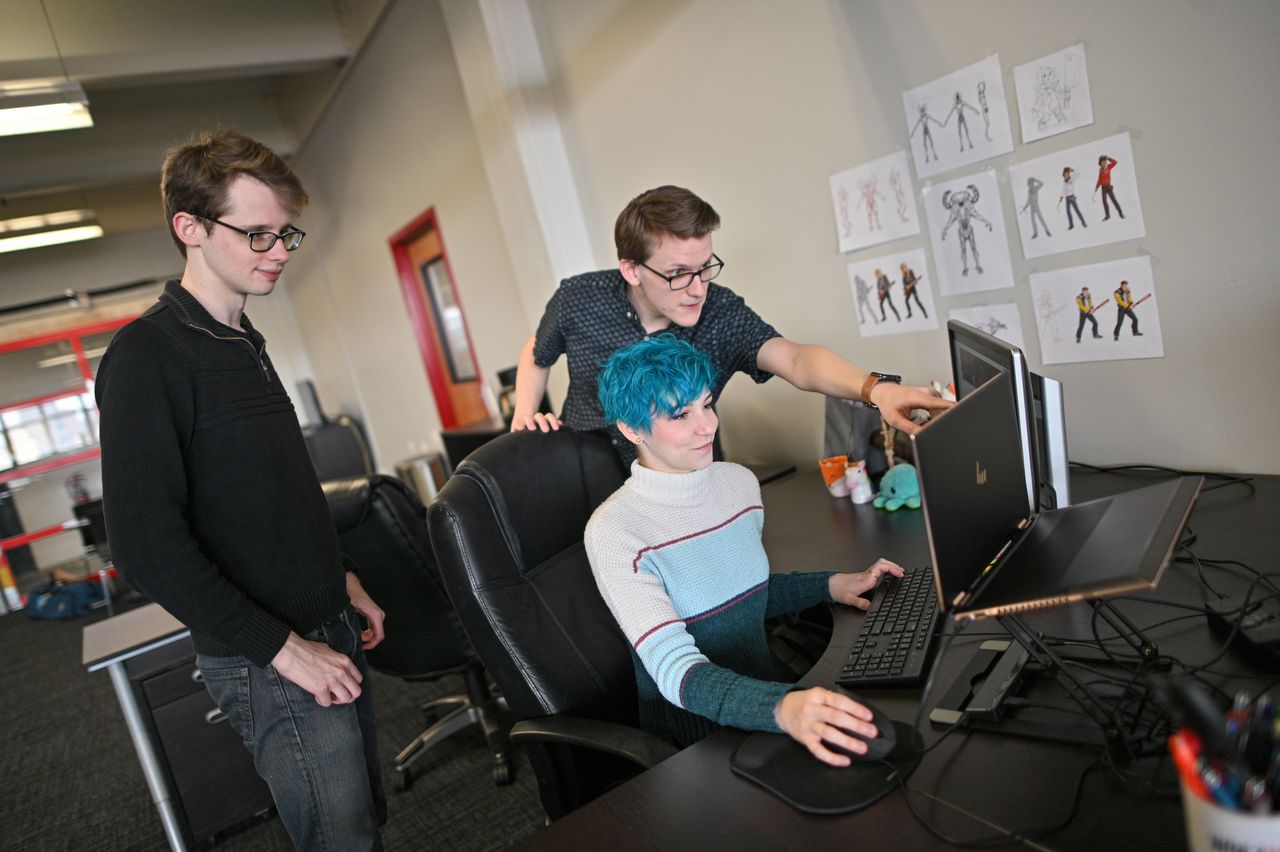 AKRON, Ohio — A new video game that looks like a cross between Call of Duty Zombies, Among Us, and a horror-themed party game is trying to drive gamers “crazy,” and it’s been developed by a company based in Akron.

“The Grip of Madness” will be RustBit Studio’s debut game and is set to hit digital shelves in October. The game will be in early access on Steam, a digital marketplace for video games. A demo version is already available.

The four members of RustBit Studio reunited after parting ways with another more machine learning-focused startup in 2021. Their office is currently at the Bounce Innovation Hub in Akron where they receive help from the incubator of companies.

CEO Patrick Howard said he saw a clear trend in 2021, amid the COVID-19 pandemic. People were looking for cooperative games they could play together online. They’ve also seen people gravitate towards social deduction games, which are games where players try to uncover other players’ hidden role (like being a traitor or an impostor).

In “The Grip of Madness”, players start in a haunted building designed to look like something out of a 1980s horror movie. Monsters called “horrors” invade the world through portals that players must try to close.

Unlike games with waves, players must close portals to gain a break from enemies. Together they must perform a ritual to stop the invasion so they can win the game.

But, a player will become possessed. Then the goal is to work against their former teammates. Throughout the game, players may also go “crazy” and begin to hallucinate, such as mistaking other players for monsters.

The first-person shooter will have a unique area and ritual every time after development is complete. So far the demo has been downloaded 3,000 times and RustBit is actively testing the game while continuing to work on it.

RustBit is about 9 months into development, Howard said. The plan is to work on it for two years and they want to continue making downloadable content after its official release.

The game is heavily influenced by Betrayal At House On The Hill, a board game where players explore a haunted mansion and discover new areas as they play. Eventually the haunting begins, and one player becomes a traitor and tries to beat the others.

Lead designer Ben Kanelos has worked on tabletop games for over a decade, but has never gotten into video games before. Along with the programmers at RustBit, he said emerging trends among board games can now see the screen.

Platforms like Steam and hits like Minecraft or Stardew Valley have created a huge market for indie games – or games made by smaller indie studios.

Howard said there is a big underground game design scene in northeast Ohio, but only a few companies like RustBit. Better computing power, off-the-shelf game engines, and even remote work have made indie game development a career, Howard and Kanelos said.

“The barriers to entry for any game design are lower than it ever was,” Kanelos said, speaking of both video games and tabletop games.

Having mentors from a place like Bounce also helps, Howard said, because they’ve been able to network with the right people through their mentorship, even if they’re not always in the same city as the players in the game.

Howard said RustBit is currently showing the game to publishers, which will eventually set the price.

Publishers aren’t required to get a game on the Steam storefront, Howard said, and self-publishing is often a viable choice. But he said RustBit wants to release “The Grip of Madness” in a timely manner.

He said publishers can provide funding and help with marketing, porting the game to consoles like an Xbox or PlayStation, and localization — the process of getting games ready for other countries and in different languages.

The number of units developers must sell to be successful varies, Howard explained. Games are hard work, but some can take months and one person, and others can take years with a team. Some bring in a few thousand sales and others around 500,000.

Howard said that for the developers, the game must bring in enough money to fund the next project.

The best thing for RustBit right now is that players interested in their wishlist on Steam are showing that there’s demand for it. It’s also extremely useful when people play the demo and join the game’s discussion group on Discord, as suggestions and feedback help improve the game.

Kanelos said playing a game in its early stages is the best way for gamers to have their voices heard.

“Try it out, get your friends to play and let us know your thoughts,” he said.

You can find “The Grip of Madness” on store.steampowered.com/app/1722940/The_Grip_of_Madness/.