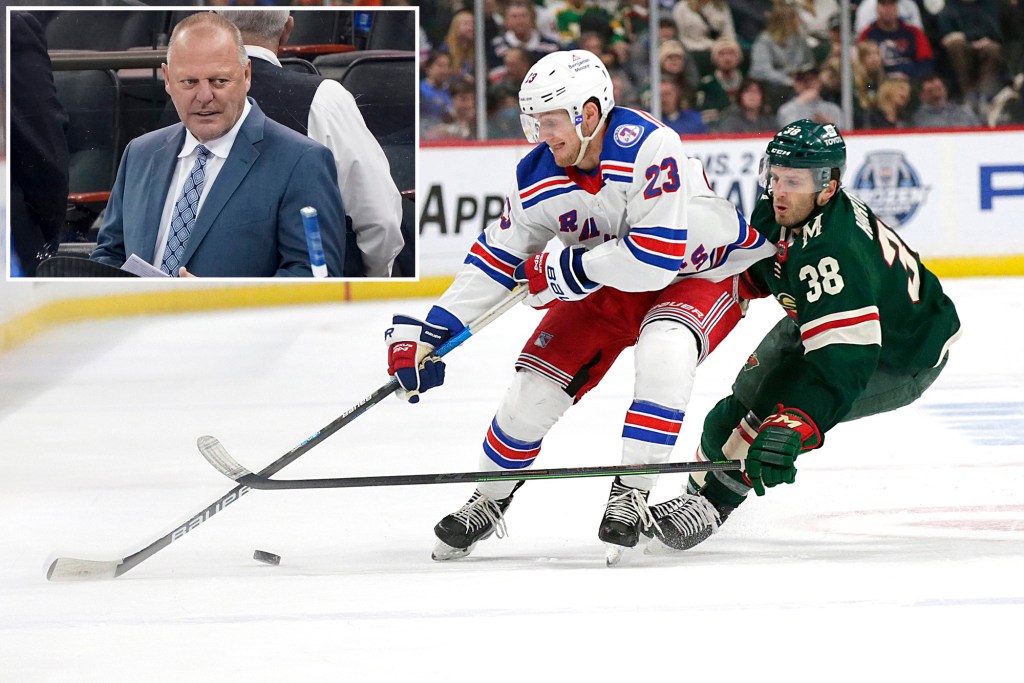 As for Rangers, who have spat from game to game despite going 6-3-1 since returning from their Feb. 15 hiatus.

1. The silver lining of Tuesday’s 5-2 loss at Minnesota is that the lopsided deal allowed head coach Gerard Gallant to limit Adam Fox’s ice time to 19:31, his lowest complement in the year other than the 15:01 he got in January. 27 game at Columbus, he left after the first shift of the third period with an upper body injury.

And the wear started to show. There are a few more mistakes than usual with and without the puck. He and trusty sidekick Ryan Lindgren have the third-best for/against goal percentage among pairs with 600 minutes at 57.38 and ninth-best among tandems with at least 500 minutes at five-on-five.

But the pair have been on six for and seven against since February 15. And, while xGF can be subject to interpretation and should never be quoted as a universal metric, it is informative when it comes to trends. And Lindgren-Fox is down 50% at 49.37 from 57.08 last season.

There’s more on Fox now. There are instances where he tries to do a bit too much. He gets caught a little more often, not having the foot speed to negate mistakes. The opposition is also paying a lot more attention to number 23. The focus on game planning against the third-year pro will only increase as the games get bigger. He will find more forechecks in his face.

When he was coaching against Bobby Orr and the Bruins in the 1974 Cup Final, Freddie Shero would have his Flyers throw the puck into the No. 4 corner at every opportunity to get a piece of him, slow down and wear it out. Shero used a similar tactic behind the Rangers bench in the 1979 semi-finals against Denis Potvin and the Islanders. Fox should expect that sort of thing this spring.

Managing Fox’s ice time down the stretch will therefore be essential for Gallant. That was the coach’s intention at the start of the season after pointing it out in training camp. But that was easier said than done.

Now, however, Gallant could cut Fox’s minutes by using Braden Schneider in his place on some shorthanded assignments. The youngster from Long Island gets 2:16 par on the PK, second behind Lindgren’s 2:22. Schneider is at 0:43. This is an area that Gallant (and assistant coach Gord Murphy, who oversees the PK) should address.

Panarin has too often seemed ordinary. Effervescence and explosiveness were lacking in his game. Precision passes through traffic does not pass. There are way too many turnovers on the offensive line. He hesitated. Taking into account that this sensitive son of Russia may have a lot on his mind, this is a problem that has persisted for months.

Multiple sources have suggested Panarin may feel pressured to play for Gallant, whose system is more structured than that of his predecessor David Quinn, with an emphasis on knocking pucks out of the zone on the breakout. As a result, fewer home runs, fewer odd breakouts in the neutral zone (unless triggered by Igor Shesterkin), and less open ice for Panarin to work with.

If there really is a problem here, it needs to be fixed. Rangers can strengthen their third line, they can add depth to the defense, but if Panarin is a pedestrian the Blueshirts are going nowhere.

3. Nights like Tuesday where Patrik Nemeth had a challenge make me worry that the blueshirts will end up paying too much to hire Ben Chiarot from Montreal.

The definition of “paying too much” is in the eye of the beholder, but mine would be the inclusion of a first-rounder, or Nils Lundkvist, or Zac Jones, or Matt Robertson, or Filip Chytil, or Brennan Othmann, or Will Cuylle, or Vitali Kravtsov or Brett Berard in the trade.

The Rear Window board game, based on the classic movie, looks amazing